Home Guest Chronicle The Death and the Afterlife in Norse mythology 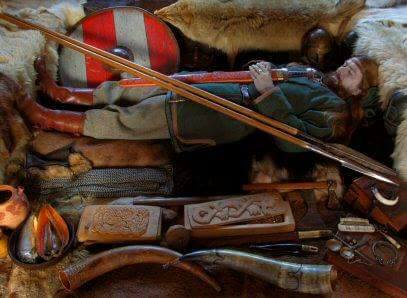 Norse mythology and religion contain no formal doctrines concerning what happens to a human, or, for that matter, a member of any other species, when he or she dies. What happens to the body and the other, less tangible parts of the self varies widely from case to case, and depends on a staggering array of factors that, unfortunately, are only dimly understood nowadays due to the fragmentary character of the sources we possess concerning Norse mythology and religion more broadly.
Still, some general, although not necessarily universal patterns can be discerned.

The resting place of the dead is located beneath the ground – a literal “underworld” that comprises a spiritual counterpart to the physical grave. The dead can interact with the living and vice versa, and oftentimes a part of the dead person is reborn. Finally, there’s no eternal bliss or eternal torment, just a transition to another stage in the endless cycle of being.

The Land of the Dead
The pre-Christian spiritual traditions of the Norse peoples, like those of animistic and pantheistic peoples the world over, view spirit and matter as being intimately intertwined rather than separable into an exclusively corporeal realm and an exclusively “incorporeal” realm.
Thus it should come as no surprise that the heathen land of the dead is a literal underworld that closely corresponds to the grave, located within the ground and especially concentrated around burial sites.
The Norse mythological texts record three primary places where the dead were perceived to go:

Helheim (Old Norse Helheimr, “the home of the goddess Hel“),

Countless theories have been proposed regarding exactly what the differences between these places are, but a closer look at the primary sources reveals that they’re practically indistinguishable from one another and are all slightly different conceptions of – one could even say that they’re merely different names for – the underworld.

Helheim (or simply “Hel,” as it is also sometimes called) is the vaguest and most general term for the underworld. In Old Norse colloquial usage, it means “the grave” or something to that effect.

Valhalla is presided over by Odin, and to gain entrance to it, one must be chosen by him and his valkyries, the “choosers of the fallen.”
Those not chosen, but still fallen in battle yet not heroic enough will wind up in

Folkvang
Similarly, entrance to Folkvang is dependent upon being selected by Freya.

The distinction between Valhalla and Folkvang isn’t altogether clear, because the principal Old Norse source that describes the two halls depicts Freya in terms that suggest she’s a valkyrie herself.
Valhalla is often depicted as a realm where distinguished warriors engage in a continuous battle, and just such a place is described, in important early sources, as being located beneath the ground – and, intriguingly, without the name “Valhalla” or a cognate anywhere in the account.

Furthermore, the very name Valhöll, “the hall of the fallen,” is a late development that seems to have arisen out of the name Valhallr, “the rock of the fallen,” a title given to certain rocks and hills where the dead were perceived to dwell in southern Sweden, one of the greatest historical centers of Odin-worship.
The only Old Norse text that makes a sure distinction between Valhalla and Helheim is the Prose Edda of Snorri Sturluson. Snorri, a thirteenth-century Christian scholar, claims that those who die in battle are taken to Valhalla, while those who die of sickness or old age are taken to Helheim. Yet he blatantly contradicts this statement in the one extensive account of Helheim he provides – namely the tale of the death of Baldur, Odin’s own son, who was killed violently and was nevertheless borne to Hel. No other source makes this distinction, and several contradict it, which means that this distinction between Helheim and Valhalla is certainly an invention of Snorri’s.

Thus we see that the different versions of the underworld are hardly distinguishable, if at all. What, then, is this place like? The sources present no uniform portrait, and some depict it in much more pleasant terms than others, but the one theme that stands out in all of these disparate accounts is just how much it resembles the world of the living: the dead eat, drink, carouse, fight, sleep, practice magic, and generally do all of the things that Viking Age men and women typically did. To die is merely to continue living, albeit in a somewhat different form.
One, quite seldom mentioned place of afterlife is Helgafjell
Helgafjell, the “holy mountain” was one idea of the afterlife which appears in West Norse sources. This mountain could be a mountain formation in the vicinity, and it was so sacred that people could not look in its direction without washing their face first. In the holy mountain, the members of the Norse clans would lead lives similar to the ones they had lived in the world of the living. Some psychic people could look into the mountain and what they saw was not intimidating, but instead it was a scene with a warm hearth, drinking and talking.

Rebirth and the Continuing Presence of the Dead
In the pre-Christian Germanic worldview, as in the worldviews of other animistic peoples from every corner of the world, the self is not thought of as being an isolated, monadic entity, as it is in Christian and post-Christian societies, for example. Rather, the boundaries between the self and its environment are exceedingly blurry, and the self is composed of various detachable parts. Upon death or sometime thereafter, these parts go their separate ways.
Other parts of the dead man or woman doesn’t rest in the grave. The hamingja (an Old Norse word for “luck” that was conceived of as being a personal entity in its own right) is often reborn into a descendent, especially if the child is given the name of the original owner of the hamingja. This was a very common practice in the Viking Age.
It’s often impossible to distinguish between ancestors and elves in Old Norse literature, to the point that it wouldn’t be amiss to speak of a part of the dead human becoming an elf in some cases.
The possibility of transmigration – being reborn as a different species – is also present in the surviving material concerning the ancient Norse worldview, although, fragmentary as the sources are, no specific instances of this have come down to us. Another prominent part of the self is the fylgja (Old Norse “follower”), an animal spirit that has a significant influence on the person’s character. (Having a bear fylgja is a sign of noble birth, a wolf of savagery, a pig of gluttony, etc.). We also know that the ancient Germanic peoples saw the boundary between the human and animal worlds as being quite porous, as evidenced especially by the numerous examples of shapeshifting and totemism in the period sources. No surviving source tells us what happens to the fylgja after death, but,(and this is an open question) is it far-fetched to surmise that it’s reborn into its proper species?

This is an undead creature from Norse mythology.
That appears to be strong, strong enough to draw the hugr [animate will] back to one’s body. These reanimated individuals were known as draugar. However, though the dead might live again, they could also die again. Draugar die a “second death” when their bodies decay, are burned, dismembered or otherwise destroyed.
Draugar live in their graves, often guarding treasure buried with them in their burial mound. They are animated corpses — unlike ghosts they have a corporeal body with similar physical abilities as in life. Older literature makes clear distinctions between sea-draugar and land-draugar.

Conclusion.
In the worldview of the pre-Christian northern Europeans, life is eternal. But not in the sense that most people today automatically think of when they hear that phrase; rather, the particular bundle of fragmentary parts that you call your “self” dissolves into its components, who then go on to vitalize your descendents and their world, just as your rotting corpse nourishes the beings around it – worms, bugs, trees, flowers. Death is a threshold in the wider process of life, not so much an end as a continuance and a transformation.

References:
Ellis, Hilda Roderick. 1968. The Road to Hel: A Study of the Conception of the Dead in Old Norse Literature. p. 84-85.

Who is who in Norse Mythology By Åke Hultkrantz