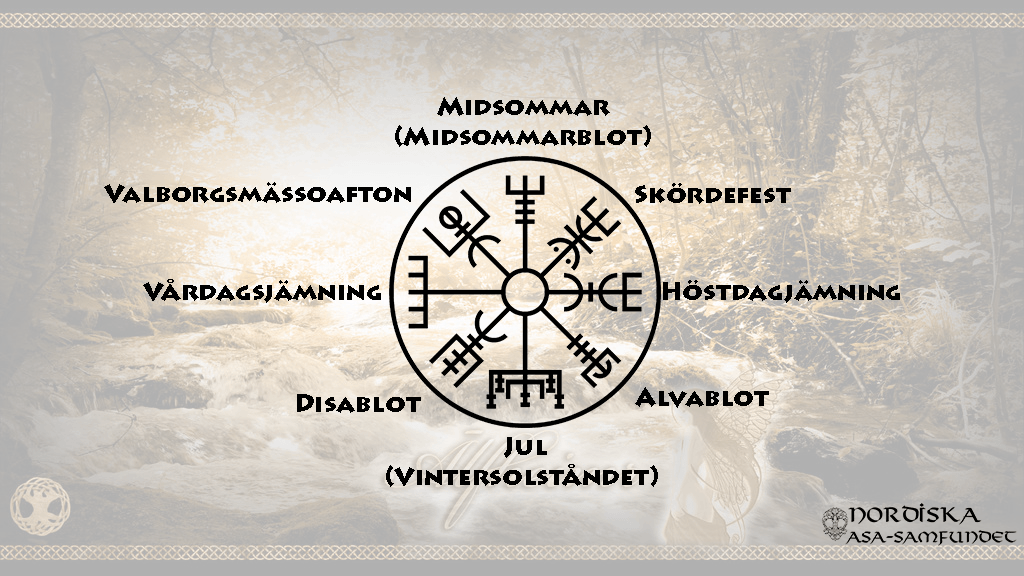 In this text we will go through the ceremonies that were most important in the Viking age according to the calendar above. Several festivals are celebrated still, even if though in other ways and on other dates. We would like to draw attention to our forefathers important days that we, as Pagans still holding high.

Before you read about the blots, here is a small explanation of what Blot means.

Blot means to worship and was a way for our ancestors to appease the gods so that they would give people a good harvest and a good life.

Depending on what you wanted you sacrificed to various gods. Tor for good weather for boating, Oden to get the benefit of his wisdom and so on.

A blot can be performed in several ways and many have their own way to praise the gods. The main thing to blot was that you sacrifice food to the gods. You can have an altar where you set up food and images of gods such, Hammer of Thor. Mead was popular during a blot and was often drunk through animal horns. How to proceed is up to each one, some talks to the gods, some indoors, some outdoors, there are many ways to show that we are thinking of them. We sacrifice only food for the gods, no animals or people. 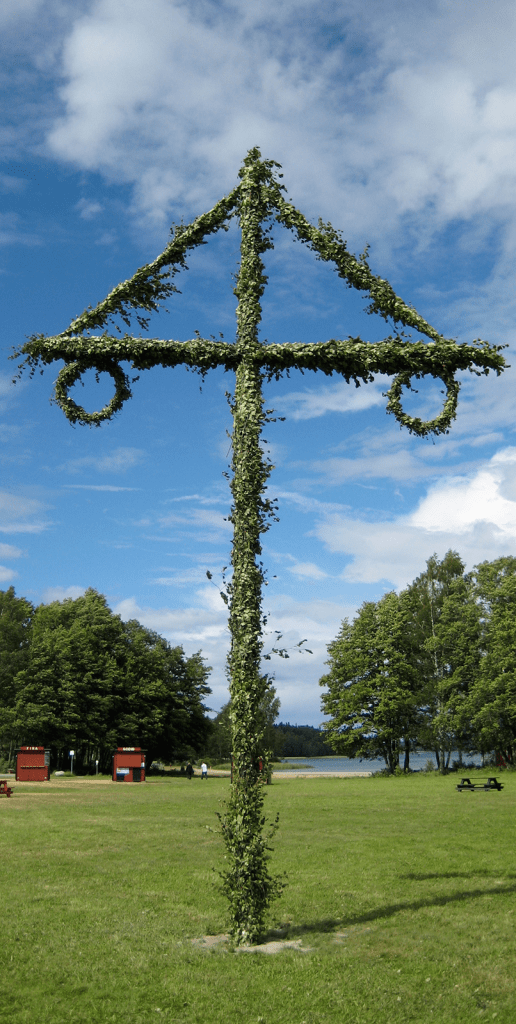 When we think of the word midsummer surely most people think of a maypole and happy people dancing around in a circle to the tones of a group of musicians in traditional costume. This fits well for the Christian Midsummer celebrations, but if we look back at our ancestors we fint that they chose to celebrate this day in a different way. Midsummer was fertility days. They sacrificed to Frey and Freya. One can assume that this was done to get healthy and strong children in the coming year. The Midsummer pole was also at that time, however, it has been modified slightly over the years. Then made a rod and a ring, the rod was carried by the men and the ring by the woman. A more obvious phallic symbol is hard to find. . To call this feast for the Midsummer feels in a way wrong due to the summer just started, but it is the summer solstice, celebrated when day and night are of equal length, which occurs around June 21.

HARVEST FEAST 20 august
As the title says, celebrated on having hit all grain and picked up all the vegetables and fruits before winter. The people had little opportunity to cultivate during the winter and there was also very little to eat in the wild during that time. Animals were slaughtered on the farm and the meat was salted so that it would stay long. One can easily imagine the earl call to the people after days of toil and pose with a big feast full of food and drinks either outdoors or in a longhouse. They sacrificed to the gods in thanks for a good harvest, even in low harvest they sacrificed in order to delight the harvest gods in a group called the Vanir that they would give a better harvest next year. It was also a time to remember their ancestors

WINTERS FINDING (AUTMN EQUINOX) 20-23 septeber
Autumn Equinox is the day when summer ends and autumn / winter begins. Another day that falls on different days every year so keep an eye on the calendar so you do not miss this day.

EINHERJAR FEAST november 1st
This day, November 1st, we celebrate our fallen ancestors, relatives, family and friends. At the time of our forefathers they held a celebration for those who have fallen in battle, and with pride in their hearts journeyd to Odin’s hall in Valhalla. Einherjar means “once a warrior.”

YULE (winter soltice) 21-23 december
The Icelandic name for Christmas is “Ylir” . The contentious in case the word is to be interpreted as wheels, for the calendar shaped like a wheel that moves toward brighter days. The winter solstice is in contrast to the summer solstice, the shortest day of the year, or July

This feast was celebrated somewhere between 21 to 23 December .

From the year 900 in a poem we find the earliest text about Yule, where Harald Fairhair at sea said to his men that he will drink Yule. At that time the art of producing strong-liquor was not found. They brewed beer and wine and mead. The honey in the mead was considered divine, among the finest you could ingest.

”A bowl should be carried around the fire, and the one who organized the feast would bless it. First, would you drink Odin’s bowl, for victory and for the king’s power, and then Njord and Frey bowls for good harvests and peace.They also drank a toast to the memory of relatives “

It’s the biggest day of sacrifice of the year, perhaps to thank the gods for the past year and to that warmer days are coming

The long table was laid up with meat of pig ox and sheep, we do not know with certainty what was served as sidedisch . They should have had a stockpile of apples, could be from were the tradition ”eat christmas apples” comes from. Especially the pig was taken care of and they even smoked or fried the head. The pig was special to the hethens belief. In Valhalla the pig Särimner was eaten every night, and every morning resurrected to be consumed during the evening party.

Disablòt February 14th
This day we are looking at the Disir’s, the female goddess, glory. In ancient times this blót was held during the Tingdiset in Old Uppsala.

Ostra (spring equinox 20 Mars
We celebrate Ostara (Spring Equinox) on 20 March. As we welcome the warmth and the beginning of spring and the coming summer.

Balders night 31 may
Yet another feast reformed by the Church. Our ancestors celebrate that spring was on its way and the warmth was back on the way to our part of the world. We honor Balder on this day, because he was considered the brightest god of them all, he was always surrounded by a bright white light.

Some of the dates changes from year to year so keep a look out in the calendar or on our face book page where we will announce a few days before.